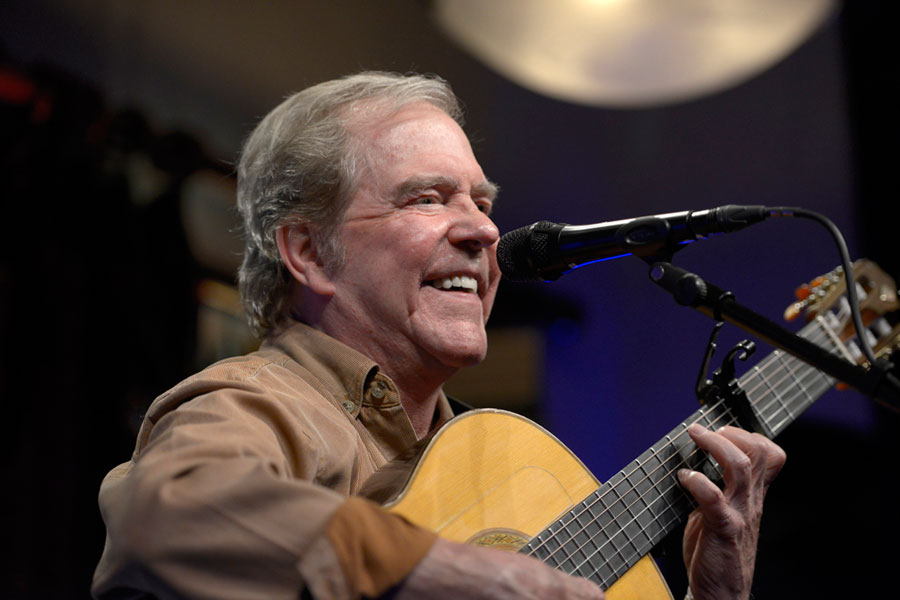 The Perseverance of Michael Johnson

Michael Johnson left this earth two weeks shy of what would have, today, been his 73rd birthday. Known in wider circles for his 1980's radio hits "Bluer Than Blue," "This Night Won't Last Forever," "Give Me Wings" and "The Moon Is Still Over Her Shoulder," he was known by his fans and friends in the music community as a consummate artist, musician, performer and kind and gentle soul.

I had been a fan of Michael's before moving to Nashville in 1986, right about the time he'd gotten a record deal on a country music label and "Give Me Wings" was a No. 1 hit. When I started Performing Songwriter magazine in 1993, he became a regular contributor for almost a decade with a column called "The Solo Performer." With each article he showed his skill, humor and respect for his craft. And on a personal level, he validated the magazine and me when I was just getting started and consistently felt like I was in over my head. He was fiercely supportive, appreciative and always present. And I loved him dearly.

Michael certainly didn't have an easy road, by choice or circumstance. He walked through life carrying the bruised soul of an artist, in all its brilliant glory and weighty sorrow. He was hilariously funny, delivering self-deprecating one-liners with ease and perfect timing. He was an extraordinary musician, having studied classical guitar in Barcelona — a skill that was quite an anomaly in the country music world he so exquisitely graced. And he was unflinching in sharing his fears and regrets, helping those around him feel not quite so alone in theirs.

One of the things that moved me the most about Michael was his perseverance and dedication to his art and craft. I'm including one of my favorite essays of his below, which still makes me cry. It's so him: the humor, the vulnerability, the frustration and the dedication. He wrote it in 1996, and over a decade later—shortly after having quadruple heart bypass surgery—he read it to a group of music industry leaders at an event I helped organize. He spoke openly about what it felt like to face the possibility of not being able to sing again after damage done to his throat when tubes were removed, painting a vivid picture to help those individuals see artists as far more than a product they were charged with promoting. (And then, ever the performer, he laughed and threw in a trademark quip: "At this age I'm starting to lose my short-term memory. And my long-term memory. And my short-term memory.") Now over 20 years after having written it, his words on perseverance are still relevant. The timeless questions all artists ask, the self-doubt, the sacrifices, and the ultimate need to create.

It was perfectly fitting that Michael was performing right up until the end, gracing stages and giving everything and more to whoever showed up to hear him. Even as he suffered from emphysema in his last days, he would leave his oxygen in the dressing room to take the stage and power through his set. His respect and gratitude for audiences never ceased. He was a pro. Music was as much a part of who he was as the rhythm of his beat-up heart. The guitar an extension of his body.

One of the last times I was with Michael was about eight years ago when he took me to my first Nashville Symphony concert at the newly unveiled Symphony Center. We got dressed up for a big night out, and after we arrived and sat down in the seats he had chosen—directly behind the orchestra so we were looking right into the conductor's face—we both felt like giddy kids. We were smiling, laughing and in awe of the beauty of the musicians and instruments in front of us as they warmed up. And I knew he was thrilled to be able to give me this gift.

When the performance started, it felt like we were a part of the orchestra, virtually in the pit with them, following the maestro's every move. It was holy, overwhelming and one of the most moving experiences of my life. At one point I looked over at Michael and saw one of his hands holding mine and the other resting on his knee, his fingers gently conducting the air. And when I glanced up at his face, his eyes were closed and his cheek tear stained.

This is how I will remember my beautiful, broken, kind, funny, brilliant friend. A man with no daylight between the music and his soul.

Franz Huss says:
February 18, 2018 at 5:10 pm
I Grew up Watching Michael Perform At The College in St. Peter MN During Christmas time! From a child to an adult for over 20 yrs. He inspired me to follow in his footsteps and become a solo singer/songwriter guitarist as well! I am so grateful to have him as Mentor and True Showman/Professinal.
Thank you Michael, you are one of my Heros and are greatly missed, You are with us Forever 😇

Kathleen Wood-Dean says:
September 9, 2017 at 11:42 pm
He lived in a chicken coop across Minnetonka Blvd from my home on Martha Lane. I sold Girl Scout cookies and when the door opened, there was an array of guitars.I had just begun playing at 8, puffed up and said that I played too. His music called deep unto deep, and I never felt alone when my heart was breaking. I knew by that pull in his voice that he had walked ahead of me. 51 years later, I still play guitar. I have an array. Thats how long Ive loved him. Goodnight bright star.

Michael Retzinger says:
September 4, 2017 at 2:59 pm
Michael Johnson was the finest. I saw him perform in the early 70’s at the UW-River Falls. “For All You Mad Musicians”…A soundtrack for life. He was an artist at moving one’s life. He was unbelievable…His music moved me to places my heart never knew were there.

Levi Strauss says:
August 23, 2017 at 6:10 pm
One of my heros. Saw him in 1975; I was a freshman at a little Catholic college in North Dakota. Two years later; an army of compadres spent a year filling our little auditorium for our young college’s first bona fide concert. Ironically and parallel to some of Michaels frustrated thoughts in your article; I passed up being a career promoter because he spoiled me. Though a music promoter of my beloved music soul food of quality classic rock and rhythm and bluesers would have been my one work passion to this day; something told me I couldn’t stand to be disappointed by shallow performers in it for the wrong reasons and without soul. I got mine; early at 18. And never drank bad wine; again. My hero and compadre, Michael. Pilot Me. Pilot Me. Levi Strauss; your prairie soul brother.

Megan McDonough says:
August 19, 2017 at 6:49 pm
What a loss. And thank you Lydia for this terrific piece. You’re so right, SO Michael. I met Michael 100 years ago when we filmed a commercial for United Airlines. The spot was about – 3 musicians waiting for a flight, playing songs… Brother, you couldn’t do that today. We co-billed here in Chicago through the years, and he’s right, all this clubs are gone. Still gonna do it Michael, and I’ll be singing some for you my friend. Meet you at the pass. I love you~

Karen Cameron says:
August 15, 2017 at 10:43 am Thank you for sharing this again. He was a kind soul with an amazingly dry wit. Hard to believe I’ll never pick up the phone and hear “I’m in Dallas for a ‘telephone show’ want to come hang out?” That voice! Will miss it forever.

Rob Hahn says:
August 12, 2017 at 5:28 pm
What a wonderful musical talent MJ was! He played my college one afternoon, a free performance for students. I had some time before class, and grabbed a seat. I skipped my class to see the entire show, and did it again the next day when he returned. A couple of years later I saw him at the Guthrie theater, touring for “All You Mad Musicians” – still my favorite album. Saw many of his shows over the years, and he always lifted me up. I miss his voice already.

Kurt Hoffman says:
August 12, 2017 at 8:22 am I attended Augsburg College, in Minneapolis, in the early 1970s. Michael entertained us up in the cafeteria on many Fridays. I purchased his first vinyl LP in 1973, & still have it. I saw him in concert whenever I could, especially enjoying his Boxing Day concerts. After his transition last month, I purchased CDs of his first three albums, even though I still have serviceable vinyl copies. Rapture.

Sean O'Shea says:
August 11, 2017 at 4:05 pm
Thanks so much for this. I really enjoyed it. MJ was a huge musical influence and I already miss his sweet voice and dry wit.

Kerry Getz says:
August 11, 2017 at 12:15 pm
Someone once told me not to fear writing about the most intimate, private thoughts, because they’re the most universal. So I shouldn’t be surprised that Michael’s article expressed so many musicians’ secret concerns. He was a gifted artist, eloquent with both guitar and pen. Thanks so much for sharing again, Lydia. Btw, I’m quitting, not quitting.

Frank Walsh says:
August 8, 2017 at 9:51 pm
I first heard Michael’s music when Give Me Wings appeared on Days Of Our Lives around 1986. I’ve been singing it ever since. Thanks for reposting this, I remember reading it in the actual paper version of Performing Songwriter.

Lydia Hutchinson says:
August 9, 2017 at 7:05 am Ha! I probably saw that episode of days, too, Frank! Am so glad you got to read it in the original form back when Michael penned it — he was such a good writer. Wishing you all the best.

Laura Gold says:
August 8, 2017 at 1:52 pm
Thanks for this Lydia. I am a long time fan of Michael’s music and guitar playing. I’m so glad I got to see him perform a couple of years ago. I could see he was fragile (though I wasn’t sure why) but he gave a stellar performance. It was intimate and moving. I hope you’re well💜